Here’s what I read in October (another good reading month!): 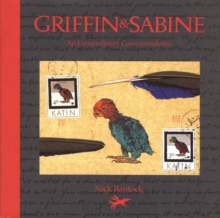 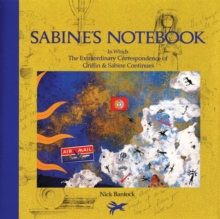 These beautiful books, Griffin and Sabine, Sabine’s Notebook, and The Golden Mean, by Nick Bantock, have been on my shelves for a LONG time. Precisely, since July 1995, when I remember buying them in a bookshop in Vancouver during a fantastic holiday to Canada. The trilogy (which hasn’t finished – now I really want to get the next installments after the cliffhanger of the 3rd book) is of the correspondence between lonely artist Griffin in London and Pacific Islander artist Sabine, who sees Griffin’s drawings as he draws them, although they’ve never met and they live across the world from each other. It takes the forms of postcards and letters that you remove from the envelope and read as though you’re reading the actual correspondence, beautifully illustrated. It’s never entirely clear what is reality and what is imagination – is Sabine merely a fevered imaginary lover to assuage Griffin’s loneliness and growing madness, or is there a more concrete mystery going on? Needless to say, in each book (including the final one) just when you think you might get an answer the plot thickens and the mystery grows. Weird and beautiful. 4.5/5 for all three of them. 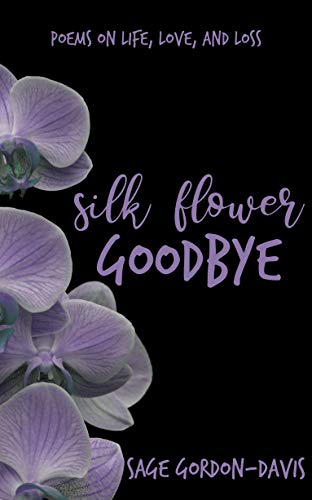 Silk Flower Goodbye is a collection of poetry just published by one of my online writing friends, Sage Gordon-Davis. I pre-ordered it and read it in its entirety for National Poetry Day (3rd Oct). Short poems about life, love and loss, I really liked these. I’m not a big poetry fan, but these were profound without being poncey, and didn’t make me feel like I was thick for not understanding what on earth is happening, which is how I feel about a lot of poetry. A couple of the poems on loss really hit me with their simple beauty. 4.5/5. 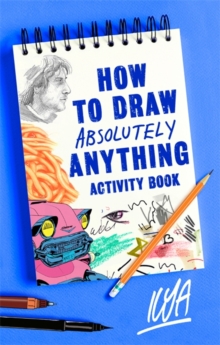 How to Draw Absolutely Anything is an activity book by the artist Ilya. It doesn’t go into detail on every possible thing you could draw, but does look at techniques, equipment, stuff to think about and then encourages you to get sketching and drawing every day. I think the ebook version missed a bit of an opportunity because I found the formatting quite annoying – especially the different font sizes – and I found his chatty style didn’t always work for me. That said, there were some useful sections on things like shading and use of different width drawing implements to get different effects, and I will try those out. 3/5. 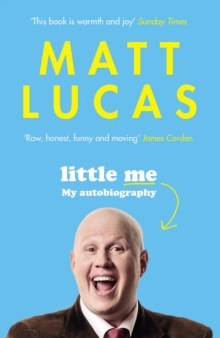 Matt Lucas, the comedian probably best known as one half of Little Britain, and as George Dawes in Shooting Stars, presents his memoir Little Me in A-Z form, and this is a surprisingly effective way to cover many aspects of his life. He’s known triumph, tragedy, absurdity and great success, and I found this a really readable and entertaining account. It’s both funny and sad, and (considering I’m not a gay Jewish actor-comedian) very relatable. As well as the highs of his career, he very sensitively talks about his split from, and the subsequent death of, his partner Kevin, and the profound effect that had on him. This isn’t my usual kind of read, but a friend of mine who is even more of an unlikely audience for this book than me read it recently and said how much she’d enjoyed it. It’s certainly worth a read if celebrity memoirs are your thing. 3.5/5. 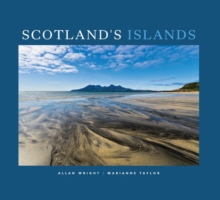 Scotland’s Islands by photographer Allan Wright is a beautiful book I got from the library this month. It’s mostly just photos, with minimal captions by journalist Marianne Taylor. Unashamedly going for the coffee table market, I’d quite happily get my own copy and leave it around for browsing. 4/5. 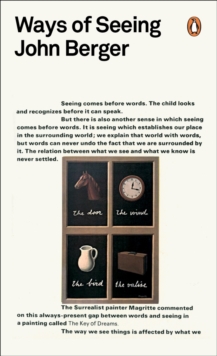 John Berger’s Ways of Seeing is a book I got related to a module of my current creative non-fiction writing course. It’s based on the 1970s documentary series of the same name, where Berger discussed paintings and other art and how to ‘read’ them. Sadly because I was reading this in an ebook version, the pictures were really difficult to make out, but other than that an interesting read. 3.5/5.

Feminism and the Politics of Childhood: Friends or Foes?, edited by Katherine Twamley and Rachel Rosen, is an academic book which draws (as the title suggests) on both feminist scholarship and childhood studies to explore how the two disciplines might more productively work together and mutually support, rather than antagonise, each other. Some of the chapters were by academics, others by practitioners from organisations around the world. I found the chapters on domestic violence and international commercial surrogacy particularly interesting. I did get really cross with one of the essays (about schools) though – it felt like the author was criticising education in schools despite their own educational privilege. 3.5/5. 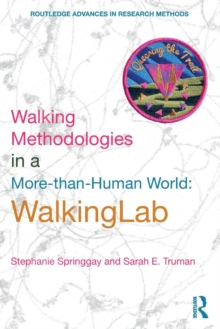 I bought Stephanie Springgay and Sarah E Turner’s Walking Methodologies in a More-than-Human World: WalkingLab recently with great expectation following someone I know’s enthusiastic endorsement, as I thought it sounded like it would have a lot to add to stuff I’m thinking about in my own writing. I’m pretty sure it does have a lot to add to stuff I’m thinking about, but unfortunately the writing was so couched in academese that I found it really hard to penetrate. There was enough there to make me think that now I’ve read it, once I’ve had a bit of a break I might go back to it and maybe I’ll see a bit more clearly what they’re saying. But I’m a bit disappointed at how inaccessible it felt. 3.5/5. 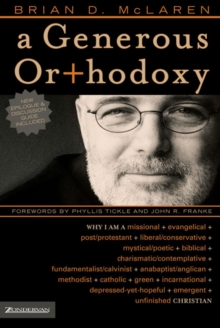 Brian McLaren’s A Generous Orthodoxy is a book I’ve had on my shelf for well over a decade, and I’m so glad I finally got round to reading it. He writes about his Christian faith, why he believes what he believes, how his beliefs have been shaped by many different denominations and ways of thinking, and the implications of all of this for living his faith. I know many conservative Christians think he’s a dangerous heretic, personally I felt this was all pretty mainstream (probably because I agreed with a lot of what he wrote). This was published in 2004, and I think particularly his thoughts on the environment and climate change were very prescient. 4.5/5.

The Moon Stallion by Brian Hayles is a real blast from my past! It is the novelisation of a TV series for children which was shown on British TV in (gulp) 1978. I remember watching it at the time (I would have been 9) and being absolutely gripped by it, and then a few years later finding this book in the library and getting it out several times over the subsequent years to read. I don’t know what made me think of it again but I got a 2nd hand copy of the book a few years ago (the cover states on the back ‘UK price 60p’ which makes me feel really old!). I’m always a bit apprehensive reading books I loved as a child, in case they don’t have the same magic, but this was just as good as I remember. Considering I was only 9 when it came out, both TV show and book are quite creepy, but it’s not gratuitous and it never gave me nightmares!

It’s based in the early years of the 20th century, around the bit of the Ridgeway that includes Wayland’s Smithy and the White Horse at Uffington. A mysterious and untamed white stallion is coveted by a rich landowner and his surly stablemaster, for different reasons, and the stallion appears frequently to Diana, a blind girl who is staying with her father who is employed by the landowner to do historical and archaeological investigations into the King Arthur myth. The stallion links past, present and future, the realm of the Moon Goddess, and pagan myth, and it is Diana who holds the key to the cosmic battle that will play out at the pagan festival of Beltane.

Great literature it isn’t, and the ending was really quite rushed, but this is a cracking story which holds up well. Plus a piece of trivia for the Dr Who nerds out there – as well as writing The Moon Stallion, Brian Hayles also wrote a number of Dr Who episodes, and Sarah Sutton, the actress who played Diana, also appeared in Dr Who as Nyssa (companion first to Tom Baker and then to Peter Davison). 4.5/5. 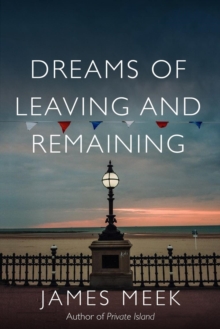 Given the tumultuous (or ridiculous, depending on viewpoint) political shenanigans currently going on in the UK, I felt an urge to read something vaguely current about Brexit. Dreams of Leaving and Remaining by journalist James Meek sees him going to various parts of the country and looking at why people voted as they did, what they expect, and how things are playing out. So he visits high Leave vote areas like Grimsby (former fish workers, potential new hub for offshore wind) and Norfolk (to talk to farmers), plus looks at the NHS in Leicestershire, and the area of the West Midlands where Cadbury closed its factory in 2010 to move to Poland. Initially I found myself a bit irritated because he seemed to be saying ‘England’ when he meant the UK (I’m English, but have been in Scotland long enough to find this tendency very frustrating!). However, once I’d accepted that this is basically an account of Brexit from an English rather than UK perspective, I was able to settle in and found this very interesting (and very sad). I liked his point that by appropriating the St George and the Dragon myth, the Leave campaign was able to tap into a narrative that resonated with voters in a way that the Remain campaigns simply weren’t. This isn’t going to convince anyone to change their minds (arguably it’s too late for that anyway), but I did find it a useful, albeit thoroughly depressing, addition to the debate. 4/5.